The year that the first Jessup competition was held in

Number of Students who participate in the competitions annually

Number of Law Schools and educational institution which have representing teams

Number of States from which teams participate

Jessup is the world's largest moot court competition, with participants from over 680 law schools in 100 countries and jurisdictions.
The first edition of the competition - back then simply named "International Law Moot" - took place on May 8, 1960, when two teams of students, all enrolled at Harvard University, discussed the very first Jessup Problem: "The Cuban Agrarian Reform Case".
Renamed after Philip C. Jessup in 1963 and opened to non-US universities in 1969, the competition is today organised by the International Law Students Association (ILSA).
The Philip C. Jessup International Moot Court Competition is an advocacy competition for law students.
The Competition is a simulation of a fictional dispute between countries before the International Court of Justice, the judicial organ of the United Nations.
Teams of law students compete against one another through the presentation of oral and written pleadings to address timely issues of public international law in the context of a hypothetical legal dispute between nations.
The Jessup Competition is named after Philip C. Jessup, the United States representative to the International Court of Justice, who was elected by the United Nations to serve a nine-year term in 1961.
Judge Jessup had a long and distinguished academic, judicial, and diplomatic career.
He practiced law and taught at several American universities until the time he was appointed as a Judge.

All educational institutions offering a degree in law or in a field related to international law are eligible to participate in the Competition. All determinations of eligibility are in the discretion of the ILSA’s Executive Director. In exceptional cases, the Executive Director, in consultation with the relevant Administrator, may grant eligibility to institutions with degree programs in international relations, provided that adequate instruction in international law will be available to all members of the Team.
Each institution may enter one Team, regardless of the number of colleges, departments, faculties, or schools within that institution, and the Team may include students from one or more of its colleges, departments, faculties, or schools (for example, by allowing a student in an international relations program to compete on the Team with students from its law faculty).
However, a duly authorized officer of an institution may petition the Executive Director, in writing and prior to the start of the Competition Year, to allow the participation of more than one Team from that institution.
Additional Teams may be allowed if it is established that each such Team fulfills the participation and registration requirements of these Rules, and one of the following conditions is met:
(i) an intramural competition or other Team selection process would be difficult or impossible to hold due to the institution’s regulations, calendar, geographic location(s), or other circumstances beyond the control of the institution or participating Teams; or (ii) the Teams represent different colleges, faculties, branches, departments, or campuses of the same institution and will be participating independently of each other. An institution located in one jurisdiction (the “home jurisdiction”) that has a permanent physical campus in another jurisdiction (the “foreign jurisdiction”), and that wishes to register a Team in the foreign jurisdiction, must petition the Executive Director in writing.
The Executive Director may consult with the Administrator in the home and foreign jurisdictions, request additional information from the petitioning school, and conduct an independent investigation.
The ILSA’s Executive Director may then grant or withhold permission to enter such Team in the best interests of the Competition. Permission may be subject to such conditions as the Executive Director may determine, including, in particular, limitations on the composition of the Team (for example, a requirement that all Team members be enrolled full time at the foreign campus).

Judges and Eligibility to Judge

The Jessup Competition is judged by an elite corps of volunteers. Judges are needed to evaluate and score the written and oral pleadings of the competitors.
All those interested in serving as judge at the Iranian National Rounds are invited to fill in the Judge Registration Form.
Given the limited judging slots available at the Iranian National Rounds, we may not be able to confirm all applicants to judge. We will contact you as soon as possible to confirm whether it will be possible for us to accommodate your request.
Hence, register today if you are interested in judging memorials or oral rounds at the 2020 Iranian Qualifying Rounds!

We request from judges invited for Jessup Competition Iranian Qualifying Rounds,
to share their experience with us.

“The standard of teams in the Iranian national round was very high. It was a highly competitive event allowing the best talent to shine. I am sure there must have been some very difficult moments for judges to choosing the best teams and some very deserving teams must have felt disappointed. But that is a competition is where the best comes out.

I am confident that the Iranian team that travels to Washington DC will make Iran and international community worldwide proud.
I wish all the success to the winning teams and express confidence that they would inspire and motivate more Iranian youngsters to undertake studies and career in international law.

MIS has done an exceptional task in organising this event. The event was run professionally by the MIS team. The organisation was impeccable- accolades to the entire team for such smooth organisation of an otherwise very difficult event!” 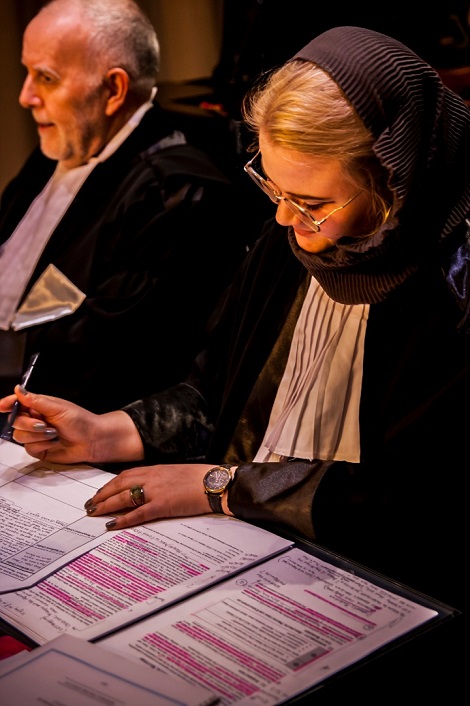 “What can I say to possibly sum up the wounderful experience of judging Jessup in Iran?
Having the opportunity to participate in an event which encourages students to debate legal problems from perspectives which may not necessarily be there own is a huge benefit in legal education.

Playing the role of a judge in pushing students to think of their feet and develop fast alternatives truly helps them develop as young lawyers and is also lots of fun for us as judges!

Further, having the opportunity to sit on the judges’ panel with such estimated names in international law from Iran was an incredible opportunity for me as a young lawyer.

The event was very well organized and the flow of compilation was seemless. I would like to say a big thank you to all of our hosts who contributed to making our time in Iran so special.”

On 2 February 2019, MIS organized the UAE Jessup Competition Qualifying Round in Dubai. 2 teams participated in this year's qualifying round and competed in 2 rounds, during which they presented their arguments as both applicant and respondent before a bench of 3 judges. Judges included:

Mr. Herb Wolfson, Arbitrator, Attorney and Instructor with 25 years of experience and Jessup judge since 2012;
Ms. Aleksandra Storozhuk, experienced legal counsel and former participant of the Jessup Competition and judge since 2015;
Dr. Sirous Motavassel, Founder of Modern International Law Studies, Attorney with 18 years of experience and Arbitrator in Investment Disputes;
Dr. Amer Fakhoury, Associate Professor of Public International Law at American University in the Emirates and Associate Dean of College of Law;
Mr. Micheal Farchakh, Legal Consultant, Attorney in New York and Beirut and Judge in the Jessup Competition since 2016.
participating teams were from Middlesex University Dubai and New York University Dubai. Champion of this Qualifying Round is the Middlesex University Team.

The Professor Vasco de Jesus Rodrigues for the Best Mooter was given to Ms. Nadia Ridwan Simpson from the Middlesex University.